Think a canoe trip in the Pantanal region on Brazil is a quiet affair? Think again!

Today we’re talking reptiles and mammals and despite the night safari being cancelled due to high winds, the 7am 4km walk through the neighbouring area showed up a whole array of strange and exotic creatures. That may sound like an early start to some of you, but believe me, it’s impossible to sleep past 5am as a cacophony of birds, ably led by the extremely loud and ubiquitous chaco chachalaca, shake you out of your bed whether you’re ready or not. (Side note here – I am awarding the chaco chachalaca my ‘how to big yourself up’ award as it has a fabulous name that sounds like a samba step and a call like nothing you’ve ever heard before yet it is the dullest and most boring looking thing you’ve ever seen. The thing is, everyone knows it and it is completely unforgettable  – a great job of self-publicity that we could all learn from!)

Back to the morning walk and it wasn’t long until we came across howler monkeys, capuchin monkeys, yellow armadillo, marsh deer, and South American coati. 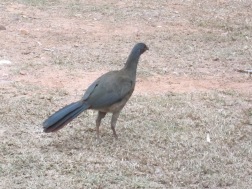 When I say we, that means me and my personal guide Edson. He and I are now joined at the hip and he leads the way on our daily walks, thrashing through the undergrowth with his large machete – why push a branch out of the way when you can hack it off in one majestic swoop? I do, however, love a man with a machete. It makes a person feel very safe!

The highlight of the day, however, came during our afternoon canoe trip. Edson and I were paddling down the river, taking in the incredible array of birds along the river bank, when we came across two enormous male caimans, nose to nose in the water, staring at other, neither one moving a muscle. Edson explained that they were in a fight for a female caiman and that it could get very nasty. We watched for a minute or so and then went on our way. About an hour later, as we came back past the same spot, there they were, still nose to nose, only now they were hissing at each other and looking as though the dispute had moved up a gear. Just as we decided to leave them to it and paddle past, one of the caimans lunged at the other and the fight was on. Unfortunately, we just happened to be in the exact wrong spot as two huge, marauding caimans came right for us, drenching us with water, rocking our canoe to the point of almost turning it over and pushing us up against the river bank. I was petrified and screamed like a chaco chachalaca. I was sure we were going into the river, to be bitten to shreds by the caimans and then finished off my flesh eating piranha.  Edson found it all highly amusing – although he did tell all the other guides about the encounter in great detail as he had to fess up that he’d never experienced anything quite like it before. I now have a phobia about caimans – they seem to be everywhere, their beady eyes following my every move. They may not be dangerous to us humans but I have heard them hiss and I am giving them a very wide berth. 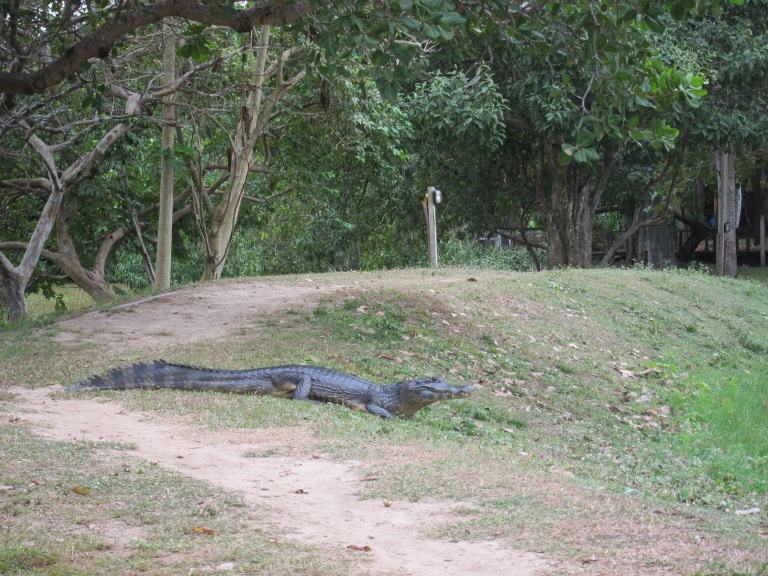 Shocked and still shaking from my near death experience, I walked back to my room only to be greeted by a group of capybara happily munching away on the grass in front of my porch.  Docile and content, they barely gave me a glance. 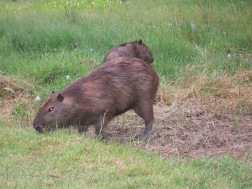 That evening, after dinner, Edson lit a fire in the pit out front of the dining room. We all sat, drinks in hand, and chatted about our day. Personally, I think he did that so he would have a captive audience for a retelling of our afternoon adventure. I’m sure that will go down in history as one of his more memorable canoe trips. I for one will never forget it!

I was stayed at Araras Eco Lodge – booked through Original Travel

This post was originally published in May 2016 and updated today.

4 thoughts on “Caught up in a caiman face off”

Fabulous #streetarteverywhere
What an amazing night! #londonlife @__gabriels__
Evening light over the harbour #staycation
This will do nicely for a couple of nights.
And so my fabulous lunch began #oxwichbay #gowerpeninsula #traveltoeat #solofoodie
Now that’s a beach. #oxwichbay #gowercoast #wales