After a few days exploring Chania, I decided that I needed to go further afield if I was to experience a little more of the authentic Crete that I was craving. I had my mind set on Marathi Beach – around 30 minutes by car from Chania and back over towards the airport. I’d heard that it was delightful and also had a great place for lunch. I was sold.

I asked one of the two young guys who manned the hotel rection desk how I could get there, not having a rental car. After much deliberation, we decided that I’d be best taking a taxi there as it might be a bit tricky to get there via public transport but I could most definitely get a bus back. I asked him to order a car to pick me up at 10.00am. This, he said, was far too early and I shouldn’t get there before noon at the earliest as it would be freezing on that side of the island first thing. I ignored his advice and arrived at Marathi Beach at 10.30am. It was a chilly 29 degrees C!

I shouldn’t get there before noon at the earliest as it would be freezing on that side of the island. I ignored his advice and arrived at 10.30am. It was a chilly 29 degrees C!

Smarting a little from the 25€ cab fare, I decided not to dwell on that too much as the bus fare home was bound to be a fraction of the price,  therefore reducing the round trip cost to something more palatable. And anyway, as soon as I set eyes on the beautiful cove and sandy beach in front of me I decided there and then that it was absolutely worth the cab fare to spend the day in such a gorgeous spot. 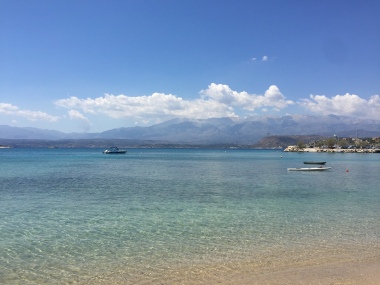 I’d been recommended the Loukoulos restaurant for lunch but first, there was a sun lounger with my name on it and a crystal clear sea inviting me in for a dip. Marathi Beach really is a tiny village with just two sandy bays, two or three restaurants, and a few houses dotted along the coastline. I decided to head for the ‘quieter’ end of the bay – although neither end was particularly busy –  where I was quickly informed that as I was on my own I couldn’t rent a lounger as they were available only in sets of two. I have to say I was quite taken aback.  At this point, this was a new one on me although I came across it again later in the week at other beaches. And even though I offered to pay the 6€ rental cost for the two loungers for the day, I was turned away. Determined not to let this spoil things I rented a lounger from the second beach bar – which clearly didn’t have an issue with me being alone  –  and settled in for the day. 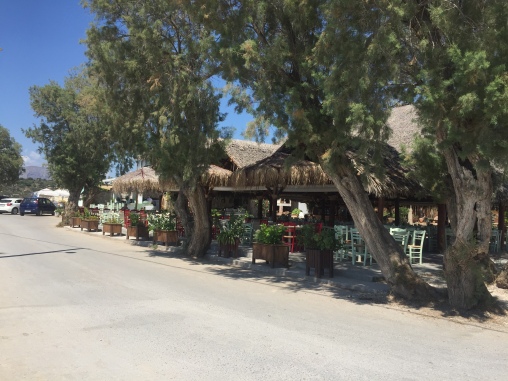 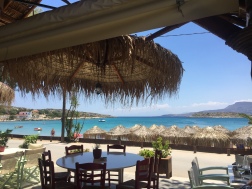 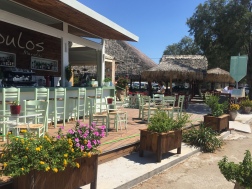 It didn’t take too long before the wonderful smells emanating from the wood-fired oven of Loukoulos lured me across the road to eat. Lunch turned out to be one of the best (and cheapest) meals I’d had since I arriving in Crete. I was hard-pressed to make a choice from the delicious list of specials which included Imam Bayildi (stuffed aubergines, a particular favourite of mine)  but plumped for tomatoes and peppers stuffed with rice and herbs with slices of crusty bread baked in the onsite pizza oven to mop up the juices, all of which was washed down with a couple of icy cold local beers. An absolute treat, with a view to die for and totalling around €10 including a tip!

The afternoon drifted by with numerous cooling dips in the crystal clear sea when it all got a bit too hot and before I knew it the time had come to get the bus back to Chania. The bus stop was right there and the timetable showed a bus at 5pm – perfect. 5pm came and went and no bus. 5.30 and still nothing. One of the waiters from the restaurant kindly checked the timetable online and confirmed the bus was actually due at 6pm and not 5 after all. 6.15 and still not a bus in sight.  6.30 and at this point, with the restaurant deserted and the car park emptying out,  I decided that if I was ever going to get back to Chania I would have to bite the bullet and go by taxi. The waiter called for a cab and while I waited for it to arrive he offered me a glass of the lovely local white wine, on the house, which by this point was greatly appreciated!

So, in the end, with the taxi fare there and back, my trip to Marathi Beach ended up costing more than anticipated. Was it worth it? Absolutely! It really was the most beautiful location, the lunch was fantastic and the sea was to die for.  Oh, and the bus? Well, I didn’t see one on the whole route back to Chania and when I got back to my hotel the evening receptionist laughed out loud when I told her that I’d expected to get a bus back! And so what if I had to pay a little more for my transport? I didn’t want the hassle of a rental car and so as a solo traveller you end up having to pay that bit more to get around; sometimes that’s just the way it is.

What a difference a day makes. Yesterday torrential rain 💧today glorious sunshine ☀️ Never tire of this view.
Sunday morning walk. Miss this place 💕
My idea of heaven
Dreaming of getting away today. Ready for some sun and a bit of heat - both the weather and the food - and a totally immersive #solotrip