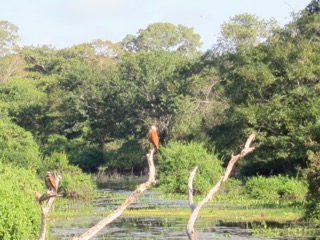 Brazilians, it seems,  have a very sweet tooth. Take for example the national cocktail, the Caipirinha, made with cachaça, sugar and lime – a heady, lethal mix of the very sweet with just the right amount of sour. Despite being in the middle of nowhere, it would appear that the best Caipirinhas for some miles around are located in a bar right next door to the lodge where I am staying. What are the chances of that?

On the side of the Transpantaneira Park Road is the Baras Bar, which is where we ended up for sundowners yesterday evening after a particularly eventful late afternoon safari involving Edson, horses and a giant anteater. More on that later.

I can confirm that the Caipirinhas were indeed fantastic and it was whilst on our second round of drinks that the only other occupant of the bar strolled over to share with us his photos of a jaguar spotted a few hours earlier just kilometres up the road.  Sadly I will not get to see this spectacular creature before I leave tomorrow morning, as I am reliably informed that it is particularly difficult to encounter them in this region until August or September, when all of the undergrowth has died down. As disappointed as I am by this, I can honestly say that my amazing wildlife experiences over the past few days have more than made up for this. Each foot or jeep safari has introduced me to such a huge variety of creatures and during each of these excursions my trusty guide Edson has done a fabulous job of spotting even the most camouflaged iguanas, armadillos and coati.

Yesterday afternoon, however, as he led us through the wetlands on a late afternoon horse back safari, he came into his own. The light was fading and we hadn’t really seen anything of note when suddenly Edson pointed ahead to something in the undergrowth; a large ball of fur, which turned out to be a giant anteater. The startled animal looked up, saw us approaching and headed off across the ground at breakneck speed. Quick as a flash Edson spurred on his horse and set off, cowboy style, to give chase.  He was magnificent and moments later he appeared from behind the trees, corralling the anteater in front of my stationary horse to provide a fleeting yet priceless photo opportunity. What a guy!

Dinner last night was a quiet affair as most of the guests had departed during the day – the end of a local holiday weekend – giving us the chance to reflect on the afternoons excitement over yet another wonderful evening meal. Of particular note was the dessert. Those who know me well will confirm that I don’t really do desserts, yet I found myself reaching for a second helping of the passion fruit mousse. Possibly a bit of a misnomer, the ‘mousse’ was a mix of condensed milk, sugar and local passion fruit – teeth achingly sweet and yet completely delicious – the sour hit of the fresh passion fruit brilliantly countering the sickliness of the cream. It seems that condensed milk features in many desserts here and I for one am all in favour if it. Whisked back to my childhood, it reminds me of special teatime treats and birthday parties and I’m already looking forward to tonights version of a similar offering, lime mousse. Before that though there’s my last afternoon walk with Edson. We’re heading to a local vantage point to watch the birds settle into the trees for the evening. It should be quiet and uneventful but in the Pantanal with Edson as your guide you just never know!

The fabulous Laura, founder of @leveledupexperiences getting ready to start the day and wake us all up @inaracamp in the Moroccan desert. Such a wonderful weekend shared with amazing ladies. Wishing I was still there!
Day to night in the #moroccan desert. My first trip to this part of the world and it really is a very special place. @inaracamp is fabulous - they think of everything! Coming from London, it is so quiet and peaceful here. I had one of the best nights sleep ever!
I love this time of year in London despite the dark nights and the questionable weather. London lights up for Christmas and it’s started already. Looking fabulous #carnabystreet
What a difference a day makes. Yesterday torrential rain 💧today glorious sunshine ☀️ Never tire of this view.